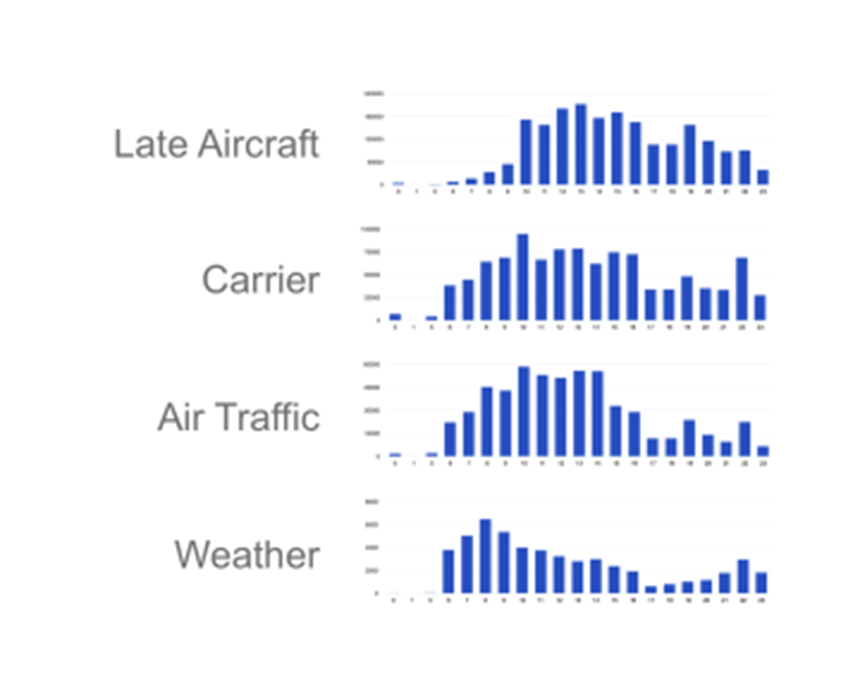 In the last blog I introduced the US Domestic Flights On-Time Record dataset, one of the open data services available for your use and amusement if you have an Openprise account.  Let’s continue our exploration of this 12-million record Goldilocks data set.

Last time we showed SFO’s on-time performance is not stellar. Today we will dig deeper into SFO’s flight delay patterns and causes.

First question, what are the causes of SFO’s flight delays?  The FAA dataset tracks 5 different types of delays:

The Openprise analysis above shows the cumulative sum of the 5 delay types aggregated by quarter. You can see that (1) late aircraft, (2) carrier, and (3) air traffic delays are the primary causes. The infamous fog/weather delay for SFO seems to be a vey small part of the overall delay picture. Hold that thought and more on the fog later.

You may have noticed the extraordinarily long delays in Q2 and Q3 of  2013. That was due to the Asiana Airlines crash in June of 2013.  That crash caused additional delays for 4 months.

Second question, what is the overall delay pattern throughout the day? From the first Openprise analysis below you see the hour-of-the-day departure delay pattern for all the US airports in aggregate. Starting at 6am, delay gradually builds up towards a peak at 5pm before tapering off after 8pm.

SFO has a very different delay pattern from average. SFO delays spike at 10am and sustains that peak for 7 hours until 5pm. Whereas the national average is a gradual buildup in delay, SFO delay comes fast and furious. So, the data advises you to either take off before 10 am or leave after 5pm.

The last question is what makes up the SFO delay pattern? In the final series of Openprise analysis, we see the hour-of-the-day pattern for each of the four leading causes of delay. For early morning flights, the cause of delay is weather and carrier. In other words, the infamous San Francisco fog and the airline staff not quite awake yet. As the fog lifts and the coffee kicks in around 10am, air traffic and carrier delays climb to their peaks, then a massive spike in late aircraft delays.

I suspect this 10am spike in late aircraft delay is caused by all the early morning east coast flights that were delayed coming in, many of them may have delayed their takeoff due to weather in SFO. When this first wave of inbound flights came in late, the cause for subsequent delays were registered as late aircraft and not weather. So my conclusion is that the SFO fog plays a bigger role than what data suggests at first glance because the flight delay data does not capture the domino effects of flight delays.

This is probably more than you ever want to know about SFO flight delay patterns, but hopefully I made you SFO road warriors a little bit more savvy when it comes to scheduling your flights.  This is also a good example of understanding and optimizing business operations by combining data analysis and domain knowledge.

Thanks for this analysis. From my own experience, a major issue for passengers is United’s unrealistically short connection times on domestic routes. United has connection times as short as 33 minutes. With inbound delays, that’s absurd. My practical advice is if you must use SFO, go for very loose connections (SFO has great food for the down time). Above all, do not book a connecting flight on United that is the last flight of the day. You’ll end up stranded and United will not cover overnight expenses.