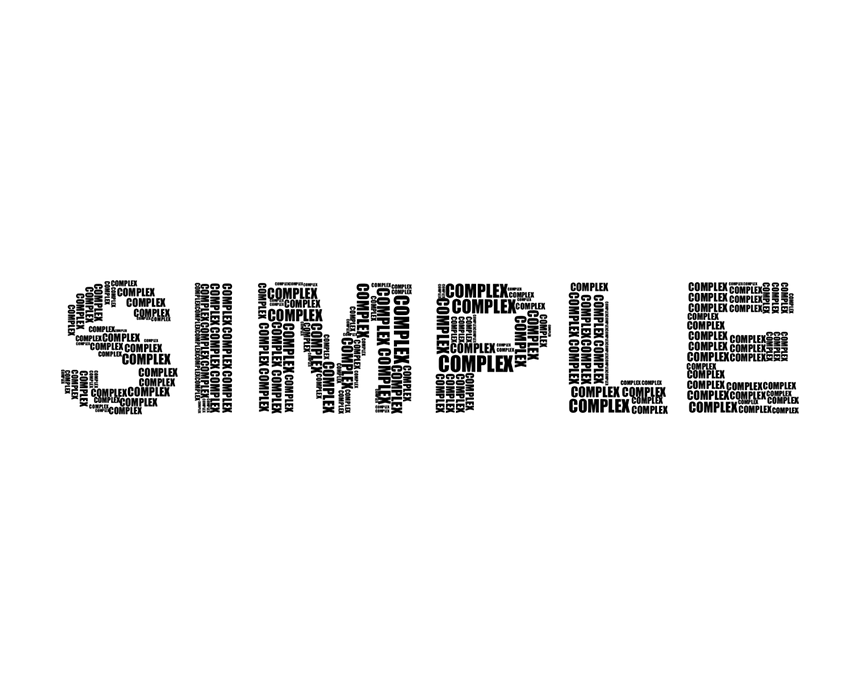 In revenue ops, the dangers of confusing simple with simplistic

We’ve all heard these sayings applied to business, like “KISS: Keep it simple, stupid,” and “the simple solution’s usually the best solution.” There’s a lot of truth to each of them. Take “simple doesn’t mean easy.” It’s also true, but it can be difficult to understand why people often confuse “simple” with “simplistic.” In sales ops and marketing ops (let’s use RevOps as a shorthand for the rest of this article), people often mistake a simplistic RevOps solution for a simple solution—when it’s usually the reverse. Let’s examine the differences between simple vs. simplistic, illustrated with a few common RevOps examples.

A SIMPLE RevOps solution is one that’s simple for both the end-user and the operator. A simple solution looks like this:

A SIMPLISTIC RevOps solution is one that’s quick and easy to implement for the implementor, but the resulting solution often looks like this:

Simple is usually not easy

Let’s illustrate simple vs. simplistic with a few common examples.

Job title is a frustrating piece of data. It’s such a rich piece of data, as it tells you a lot about who the prospect is, what they do, and whether they’re the right person for your sales team to pursue or for your marketing team to target. Yet, it’s a very difficult piece of data to work with because it:

So, we can’t use raw job title data for any analytics or automation needs. The first impulse for many RevOps folks might be to standardize on job title, in other words, transform all these variations into Vice President of Human Resources

Then they compile a list of every variation of these job titles they’ve ever seen to do a search and replace. This is a simplistic RevOps solution because the design and implementation is quick and simple. But it’s difficult to manage and scale, and the end result is limited in usefulness.

A simple RevOps solution, from the end user’s standpoint, is not to deal with job title at all, but instead use structured and abstracted job function, job sub-function, job level, and buyer persona. So instead of “Vice President of Human Resources, Pension and Retirement, Americas,” the much more usable data is:

This data is ready to use for analysis, modeling, and automation. It’s a simple solution. But it takes a lot of technology, job keyword data, and know-how to turn any old job title into structured data reliably, so it’s not an easy solution and definitely not a simplistic solution.

If your organization does any scoring at all, it’s probably incremental behavior scoring, looks something like this:

This simplistic RevOps solution can be implemented quickly and easily with any marketing automation platform like Marketo and Eloqua. It’s simplistic because it’s unclear what this score actually means and how it would be useful to a salesperson. Take these three prospects with exactly the same score of 100:

In most companies, sales will likely tell you they don’t think marketing’s scoring is very useful and they’re not sure how to use the score effectively to improve their ability to prospect.

A useful surge model can tell the sales team that Prospect #1 is nothing to get excited about, Prospect #2 is worth chasing and time-sensitive, and Prospect #3 is still highly engaged but no need to sound the alarm. While it’s more difficult to implement this type of scoring engine, it’s simple for the sales team because a high score corresponds to a better lead to them, without their having to dig into the detailed engagement history to really understand whether a lead is really good despite the high score.

First-touch: the marketing activity that added a new prospect into the database. This is clear and not very controversial.

Multi-touch: measures the nurturing engagements that contributed to a successful sale. While RevOps professionals love to debate the merits of different multi-touch distribution models, it’s largely a religious debate. None are perfect and no one can really prove the superiority of one model over another. Any measurement’s better than no measurement in this case.

Last-touch the last marketing activity that preceded the creation of an opportunity in the CRM. Sounds logical enough. Last-touch can be useful for low-price B2B sales, but makes absolutely no sense in higher priced B2B sales where the salesperson is more than just an order taker.

In this type of sale, the salesperson always creates the opportunity following some type of qualification conversation. For Marketing to claim that any marketing activity triggers converting a suspect to a prospect is at best self-delusional. We can fairly confidently state that the activity that should receive last-touch attribution is always a sales activity. While that’s accurate, it’s hardly insightful and useful data.

Instead, simple last-touch attribution is the last activity that turned a one-way engagement into a two-way engagement, for example:

This type of last-touch attribution is simple to understand and offers demonstrably valuable insight. But gathering all the necessary data to enable this type of attribution and ensure accurate results is very difficult and very few companies have been able to achieve it.

Knowing the difference between simple and simplistic RevOps solutions

The unfortunate truth is that simple RevOps solutions are hardly ever easy. It takes time and effort to think through the design, get all the data needed to support the solution, and implement the process and technology to make it sustainable.

So why is it important? While you may conclude that a simple solution is too difficult to do (and the organization doesn’t have the appetite to do it at the moment), it’s still valuable to really understand the difference between a meaningless simplistic solution vs. a useful, simple, but hard-to-implement solution. Spending time and resources to build a simplistic solution is not only a waste of time and valuable resources, but can erode trust and confidence between teams. And in the worst case, it provides the wrong feedback to leadership about continuing to invest in stuff that doesn’t work or could potentially harm the business.