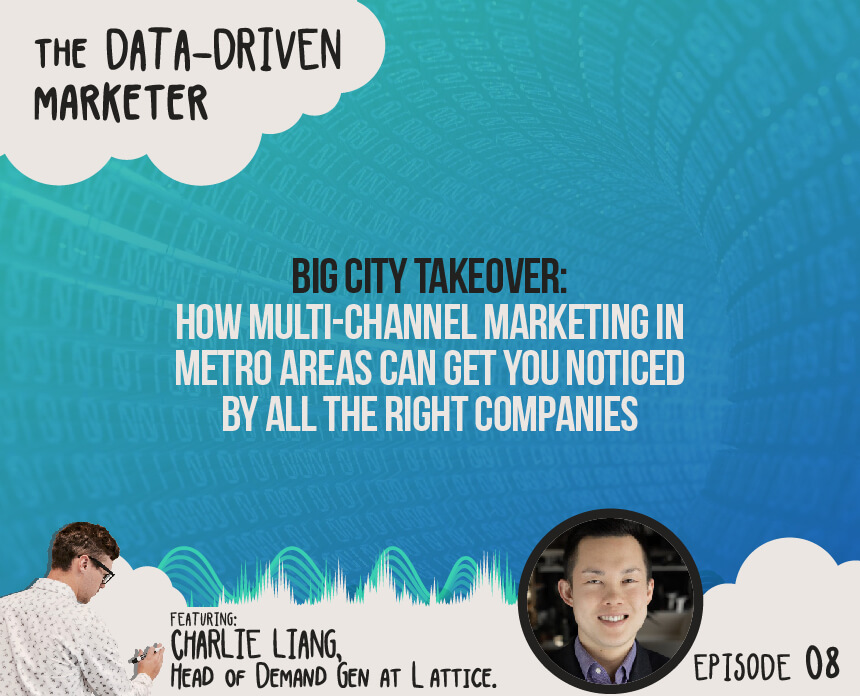 Big city takeover: how multi-channel marketing in metro areas can get you noticed by all the right companies

When over 60% of your business comes from two cities—you might want to look at a few more cities.

Charlie Liang, Head of Demand Gen at Lattice, helped design the company’s City Takeover Campaign. When he saw that over 60% of Lattice’s revenue came from San Francisco and New York, he realized that big cities required more of their attention.

The company decided to double down on those two cities, but they also wanted to add two more. We interviewed Charlie about how they decided which ones to pick—as well as some of his thoughts on ABM.

Here are some of the highlights.

The Lattice marketing team had a theory: Good marketing is marketing that you see everywhere.

The more channels you direct to the same people to the same time, the more effective it is. And this multi-channel marketing strategy has a compounding effect.

That’s how they knew that city-specific marketing strategies were effective. When prospects come up to you and say, “I keep seeing you all over the place; what do you do?” you’ve done your job as a marketer.

Of course, marketing teams have limited budgets, so they couldn’t choose every city. Instead, they picked four to test. Then they tested all kinds of channels: Out-of-home (OOH)—including billboards and public transit systems—as well as events, marketing/sales outreach, and direct mail campaigns.

New York and San Francisco were obviously the cities to double down on. But they wanted to diversify into two more.

How Did They Choose the 2 New Cities?

The Lattice team selected the new cities using a series of both top-down and bottom-up decisions. Top-down, they knew generally which cities looked like other successful cities and would work well. And they also got buy-in from sales.

The team also researched inventory for things like billboards. For example, Chicago and Los Angeles aren’t great for billboards because they’re so spread out. And in Seattle, there’s limited inventory.

Based on all these factors, the team ended up choosing Chicago and Seattle as their two new cities. While OOH campaigns aren’t as effective in these cities, they still had a number of multi-channel marketing strategy tricks up their sleeves—including direct mail campaigns and several other channels.

While we were interviewing Charlie about the City Campaign, we had to dive a little deeper on his ABM philosophy. After all, he helped pioneer some of the strategies at Engagio.

Here’s what he told us:

ABM is not that different from demand gen. But with demand gen, you have fewer accounts and you can’t do as much. A lot of people think ABM isn’t for them, but they miss how widely applicable it is.

The first thing to do is build your own database. And the second thing is to make sure you and the sales team go after the same accounts with a coordinated effort.

Otherwise, your ABM efforts might get a lot of top-of-funnel interest, but if they’re not the accounts your sales team wants to go after, it’s all for nothing.

Here’s What Doesn’t Work in ABM

You hear a lot of people talk about this, but it’s true: you have to work with sales development and sales to have a successful ABM strategy.

If they’re not bought in, not coordinated in their efforts, you’re going to look silly. If they’re blasting the same accounts you’re targeting with direct mail campaigns, the messaging won’t be in lockstep.

We hope you loved this blogpost, based on our Data-Driven Marketer podcast, where we interviewed Charlie Liang from Lattice.

Check us out on iTunes, or at this link.