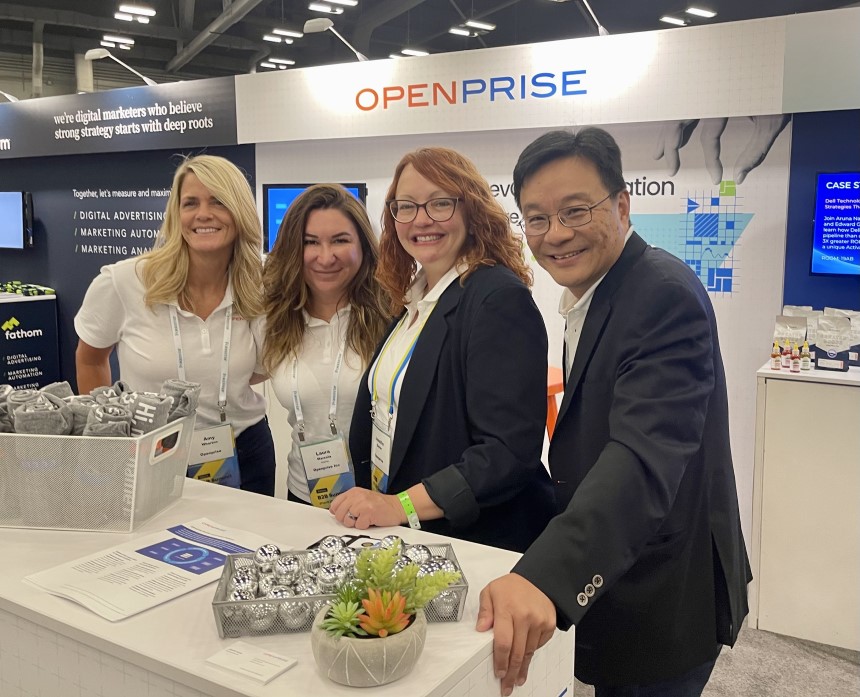 This year’s Forrester B2B Summit 2022 took place in Austin, Texas from May 1 to May 4. For many people, including myself, this was the first conference since COVID put a stop to all in-person events. In fact, this was the first time I got on an airplane in two years. I had to remember how to pack my luggage and navigate airport security again. The Forrester conference had about 1500 attendees, and if my memory serves me correctly, that’s about a third of what the previous SiriusDecision Summit drew. That’s really not a bad turnout given that this is one of the first major conferences held in-person. The combination of a large venue and lower attendance produced an energy level at the show that was muted compared to previous years. But hey, not a bad start for the industry to adjust to our new normal. You definitely sensed that the attendees appreciated the opportunity to interact with their fellow revenue professionals in person again after such a long hiatus. Openprise, along with our partner KPMG, hosted two dinners for customers. This was the first time our team met some of our newer customers like Lexmark and Conversica, as well as new contacts from long-time customers like Nutanix and BigCommerce. It’s amazing how meeting with enthusiastic customers lifts your spirit.

After four days of conversations with customers and prospects, meeting with Forrester analysts, and attending the various sessions, I had three major takeaways from the Forrester B2B Summit 2022:

Many people immediately understood the challenges of RevTech stack complexity, technical debt, and tech stack consolidation when Openprise started talking about those challenges three years ago. That’s because they were living the problem daily. But an equal number of people didn’t seem to get the severity of the problem and how it impacts their jobs. Fast forward three years, and this was part of almost every conversation we had at the Forrester B2B Summit. There was a strong sense of people being overwhelmed by the technology choices available to them and the complex technology stacks they manage. Scott Brinker also released the 2022 Marketing Technology Supergraphic the same week, and this year it’s a mind-bending 9,932 vendors. If that doesn’t send you into paralysis, I don’t know what will. There were three specific sources of complexity that people talked about:

RevOps teams typically use their technology to either manage or gather data for the revenue funnel. What people may not realize is that most companies don’t have a single unified funnel managed by one team. Instead, they have multiple fragmented funnels or parallel funnels managed by multiple teams. For example, marketing manages the top part of the funnel and sales manages the middle and bottom parts of the funnel, while channel opportunities often flow through another funnel and product-led growth prospects live in yet another world. Even within sales, new business and upsell funnels are often separate and discrete, and marketing has little visibility or influence into the upsell funnel. Forrester’s B2B Waterfall highlights the full extent of a “funnel” and how most companies and technologies only focus on the new business funnel, while the other funnels combined can make up 80% of your business. There’s now more awareness of the lack of a true unified funnel, or at least the lack of visibility into the multiple funnels within the organization.

Feeling the impact of the accelerated pace of M&A

One of the side effects of COVID was that it accelerated the pace of mergers and acquisitions. COVID negatively impacted many companies’ top and bottom lines and turned them into takeover targets. Conversely, the well-run companies saw this as an opportunity to scale their business by picking up companies on the cheap. At the extreme, the companies that benefited from COVID had a bigger war chest and became acquisitive. Private equity investors accelerated this by combining some of their struggling portfolio companies to squeeze out efficiency and performance. Just as the impact of COVID started to wane, the stock market correction has driven public technology companies’ stock prices down and compressed the multiples. The investor community is already sounding the alarm about late-stage private companies experiencing difficulty raising new capital, as well as deals closing at multiples as low as 8x. This is expected to drive a new wave of M&A for the next 12 to 18 months.

An M&A event makes the RevOps environment exponentially more complex for years to come. We’ve seen customers who are still running multiple Salesforce and Marketo instances more than five years after their M&A events. I gave a talk with Ewan Auguste, CMO of PlanSource, at the Forrester B2B Summit on RevOps best practices in an M&A scenario. I’ve been through multiple M&As in my own career, and we’re actively helping Openprise customers manage their M&A tech stack across different phases of maturity. Ewan just recently served as the Head of Marketing Technologies at Adobe Workfront, managing that technology stack merger first-hand as a result of Adobe acquiring Workfront, and is still digesting Adobe’s acquisition of Marketo and Magento Commerce. The session was well attended and, via a quick raise of hands, it was confirmed that everyone had been part of at least one M&A and expected more to come at an even faster pace.

COVID obviously changed the engagement model as it removed most of the face-to-face engagements and replaced them with digital engagements. Almost all the vendors I talked to at the show told me they haven’t gotten good ROI from the virtual events they ran or participated in the last two years and are happy that in-person events are coming back. Even though the attendance was low, the vendors agreed that it was a great investment because the engagement quality is high and it’s part of a multi-channel engagement strategy. The new work environment is already introducing new challenges to face-to-face engagements, beyond the fact that fewer people are willing to travel and meet in-person. COVID fundamentally changed the workforce, leading to a distribution of workers across the country as well as a hybrid remote/in-office situation. This makes scheduling onsite customer visits and sales meetings difficult since the teams you need to meet with are either not in the same office, are in the office less frequently, or even both. Other forms of in-person engagements may have to increase to supplement onsite meetings. Local in-person events, road shows, and industry conferences will become more important in this new norm where it’s harder to go to your customers, so we all have to make a point to meet up in some other venue outside of our offices.

Even before COVID we saw a steady decline in single-channel engagement’s ROI. COVID not only exacerbated the problem, but highlighted the effectiveness of a multi-channel engagement strategy, even when all the channels were digital. Engagement strategy will continue to become more complex as in-person channels come back. Physical channels are more difficult to measure than digital ones, so expect attribution and campaign performance measurement to also become more complex and difficult as new norms are established and new engagement models emerge.